Nobody seems to know who created this video. It was posted on September 16th by a YouTube user who calls himself "Srachi" and lists the location of the flight simply as the Mer de Glace area near Chamonix, in southeastern France. Mer de Glace, or Sea of Ice, is one of the longest glaciers in the Alps. It's about 660 feet deep, and extends for more than four miles. Some news outlets speculate that a GoPro action camera, which weighs just a few ounces, was used. Others say that the man visible at about 21 seconds into the video might be the bird's handler.

My opinion? This could be a teaser clip from the series "Earthflight," currently airing on PBS. The next episode - the sixth and last in the series - is entitled "Flying High," and airs October 9th. This installment reportedly looks at the techniques used in the production of "Earthflight." And the promo photo shown here reveals a small camera strapped to the back of an eagle: 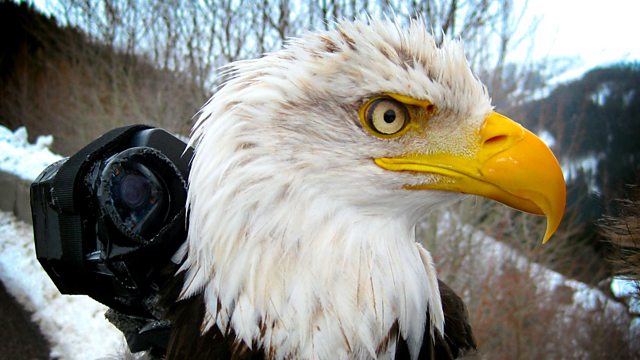 My wife, The Hungarian Spitfire, and I now live on a tiny man-made lake inside Leisure World, which is a "55+ active-adult resort-style community," consisting of 2,664 homes on 958 acres. Some people like to call it "Seizure World." It's where old people like us go to learn "rejuvenating" (translation: "mind-numbing") games like shuffleboard and Mah Jongg. These games don't really make your life any longer, but they sure make it feel that way.

In the middle of the man-made lake, there's a dead goose, which is also man-made. The goose decoy is designed to make sure gaggles of migrating geese continue to migrate. If the migrating geese believe that a fellow goose has died on this possibly-polluted lake, they won't be tempted to land, drink the water and drop their massive loads of stinky goose poop. At least that's the explanation we were given by the homeowners' association.

But the decoy doesn't faze the half-dozen ducks that hang around here. They obviously don't give a rat's a** if there's a fake dead goose in their lake. Ducks are a lot smarter than geese.

The six ducks jog past on the walkway outside our window every morning, quacking more-or-less in unison. They remind me of a platoon of recruits, on their way to some top-secret military operation at the other end of the lake. I've seriously considered reporting them to WikiLeaks.

A Great Blue Heron sometimes visits the lake at sundown. He looks like slumming royalty, and doesn't like it when I try to sneak up on him for a snapshot. He disdainfully flies away to maintain a comfort zone of about fifty feet. His Highness has established the proper distance for civility, thankyewverymuch.

In between Duck Time and Heron Time is Nyuszi Time. The Hungarian Spitfire calls the desert cottontails by their Magyar name, and I'm too lazy to call them anything else. We've been putting out sliced carrots to draw them closer to our door. I wanted to try julienned, but The Spitfire thought that was a bit much.

Several families of quail sleep in the orange tree out back. They have intense, noisy arguments every evening, but somehow settle their differences before nodding off. They pop out tiny babies at an enormous rate, and when the families run past in a line, with their head plumes earnestly drooping forward and bobbing, they look like they're on their way to perform in a comedy skit.

The doves in our neighborhood love to play "Chicken" with the cars. These birdbrains sit in the middle of the street, and wait until a car is five feet away before flying off. I used to hit the brakes, but they play this game at least once or twice per block, so I began to assume they knew what they were doing. However, one of them misjudged the distance yesterday morning. Services will be held Saturday.

And I've gone back to hitting the brakes.

Four or five geckos took up residence at this address long before we did, and they graciously allowed us to move in our stuff and live here with them. The Spitfire freaked out a bit when she saw the first gecko who got lost and made his way into deadly territory -- our living room. I spent several fruitless hours trying to capture the lightning-fast little bugger, while pleading with her, "He's not dangerous. He eats bugs. He's our friend. Please don't make me kill him." So we worked out a compromise with the geckos. They have agreed to patrol outside, near the all-you-can-eat bug buffet next to our front walkway, while we politely look the other way when the tiny gecko youngster gets lost and strays inside the house.

At the main entrance to Seizure World is a kitschy steel-and-fiberglass globe sculpture. It's 40 feet high and weighs about 4,000 pounds. I'm sure it was mighty impressive back in the Seventies, when it still revolved, but four decades of Arizona's brutal summers have taken their toll. It's still impressive, but in a threadbare sort of way.

The people who live here are also impressive. They have a wisdom that comes from years of being caught up in the mindless distractions of the rat-race, then suddenly realizing that cultivating patience and becoming mindful of the simple things can also be important parts of a life... no matter how much of it remains to them.

It ain't John Cleese... but it's hilarious nevertheless:

The British are feeling the pinch in relation to recent events in Syria and have therefore raised their security level from "Miffed" to "Peeved." Soon, though, security levels may be raised yet again to "Irritated" or even "A Bit Cross." The British have not been "A Bit Cross" since the blitz in 1940 when tea supplies nearly ran out. Terrorists have been re-categorized from "Tiresome" to "A Bloody Nuisance." The last time the British issued a "Bloody Nuisance" warning level was in 1588, when threatened by the Spanish Armada.

The Scots have raised their threat level from "Pissed Off" to "Let's Get The Bastards." They don't have any other levels. This is the reason they have been used on the front line of the British army for the last 300 years.

The French government announced yesterday that it has raised its terror alert level from "Run" to "Hide." The only two higher levels in France are "Collaborate" and "Surrender." The rise was precipitated by a recent fire that destroyed France's white flag factory, effectively paralyzing the country's military capability.

The Germans have increased their alert state from "Disdainful Arrogance" to "Dress In Uniforms And Sing Marching Songs." They also have two higher levels: "Invade A Neighbor" and "Lose."

Belgians, on the other hand, are all on holiday as usual; the only threat they are worried about is NATO pulling out of Brussels.

The Spanish are all excited to see their new submarines ready to deploy. These beautifully designed subs have glass bottoms so the new Spanish Navy can get a really good look at the old Spanish Navy.

Australia, meanwhile, has raised its security level from "No Worries" to "She'll Be Right, Mate." Two more escalation levels remain: "Crikey! We Might Need To Cancel The Barbie This Weekend!" and "The Barbie Is Cancelled." So far, no situation has ever warranted use of the final escalation level.