A GUY is lying on the floor, playing with the "Skeeter" Obama action figure. The doll is aiming a rifle, and the guy makes SHOOTING noises every now and then.

GUY: Boom! Boom! Boom! This is the new "Skeeter" Obama action figure, made by a Connecticut toy company. It commemorates the skeet shooting that President Obama reportedly enjoys at Camp David.

The guy turns the Obama doll, as if it's aiming at a moving duck.

Again, the guy turns the Obama doll, as if it's aiming at another moving duck.

One final time, the guy turns the Obama doll, as if it's aiming at a third moving duck.

The guy picks up a "Dick" Cheney action figure, which is aiming a shotgun. 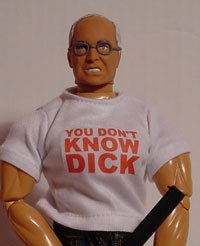 GUY (continued): This is the "Dick" Cheney action figure. He's probably known best as the vice president who "accidentally" shot his friend in the face, during a 2006 hunting trip.

The guy turns the Cheney doll, as if it's aiming at a moving duck. The shotgun slowly turns, to point at the Obama doll.

The Obama doll falls over. The guy jiggles the Cheney doll, as if it's laughing.

Have I told you my Ben Bernanke story yet? (He's the Fed chairman who's currently in the news. Some say he's the most powerful man in the world.)

I already told you the story? OK, shut up and listen anyway. ;-)

Last spring, I found out from a 2009 Time magazine article that he competed in the National Spelling Bee when he was a kid. So, after going through the speller lists from the two years I was in the Bee, I discovered that he and I sat next to each other in 1965 (he's wearing #18, representing Anderson [Dillon] SC, and I'm wearing #19, representing Lowell [Chelmsford] MA). It looks like he's leaning over to give me financial advice.

I misspelled "gneiss" that year, to finish 14th in the country. Ben misspelled "edelweiss" and finished 26th. I don't have a song memorializing my losing word, but Ben does. 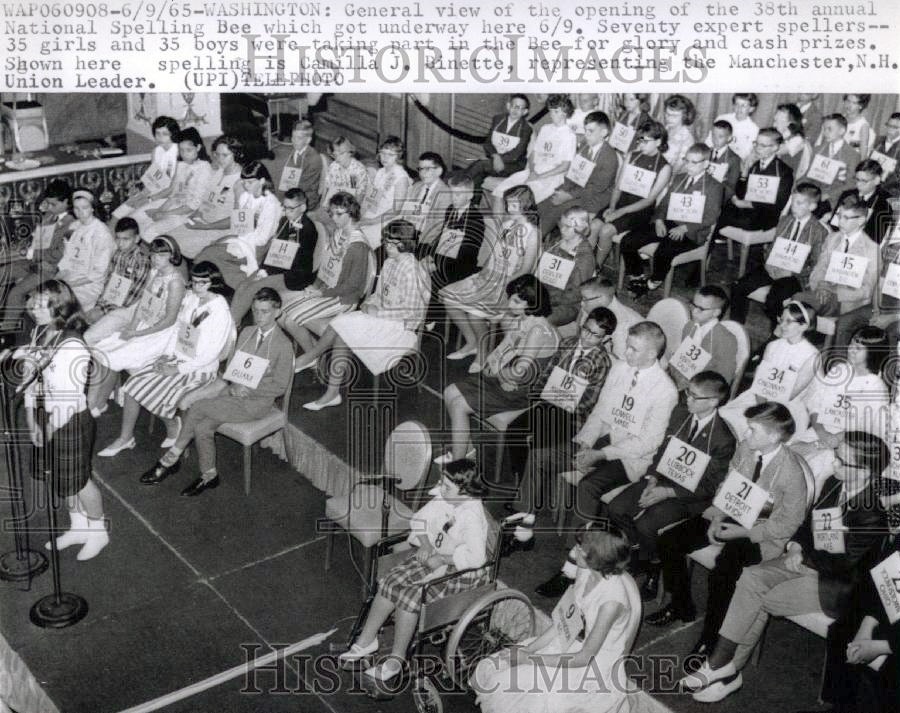 If you have a QR-code scanning app, like this one:
http://www.neoreader.com/get-neoreader/app-stores

on your cell phone, you can scan the code below for a link to several micro stories written by moi. Or, if you're like me and you DON'T have such a phone, you can still view a simulation here:
http://www.testiphone.com/?url=http://9TimeZones.com/if.htm

And here's a direct link: http://9TimeZones.com/if.htm When it's his turn, the guy sits down with the doctor and answers each question perfectly. The doctor's amazed, and asks: "How were you able to answer all those questions correctly?"

The guy points to his head and replies: "Kidneys, man! Kidneys!"

A man travels to a remote South Pacific island to relax and do some sightseeing. Upon arrival, he hires a native guide, and while they're seeing sights, a strange-looking bird flies overhead and drops a load of poop on the guy's shoulder. He reaches up to wipe it off, but the guide grabs his arm and says, "Oh, no! That's a Foo bird, and if you remove its crap, you will die immediately!"

The guy replies, "Ah, that's just a silly superstition," and wipes off the stinky mess. Sure enough, he drops dead on the spot.

A guy walks into the zoo, and strolls past the gorilla cage. The gorilla strolls along with him, inside the cage.

But when the guy pulls down his bottom eyelid with his finger, the gorilla reaches through the bars, yanks the guy inside the cage, beats the crap out of him and throws him back outside the cage.

The zookeeper comes to visit the guy in the hospital. He apologizes, and asks what the guy did, to get the gorilla all riled up.

The guy says, "I just pulled down my bottom eyelid with my finger, like this."

"Oh, no wonder," replies the zookeeper. "In gorilla language, pulling down your bottom eyelid means 'F*ck you.'"

So the guy plans his revenge. A few weeks later, he's strolling outside the gorilla cage. The gorilla strolls along with him, inside the cage.

The guy then reaches into his pocket, pulls out a razor blade, and starts slicing up the salami.

He offers the razor blade to the gorilla.

The gorilla reaches up to his bottom eyelid, and pulls it down.

"Hey," said the new arrival in the pub, "I've got some great jokes for St. Patrick's Day!"

"Before you start," said the big guy in the corner, "I'm Irish."

Some folks from the north country like to spend their winters here in Phoenix. Since they often fly in to escape the snow, we call 'em "Snowbirds." Many of them have second houses here.

They also have cars, unfortunately. In the winter months, we see a lot of license plates from Alberta, Manitoba and Sas-katch-e-wan.

In my experience, Canadian drivers are slower than Arizona drivers. Much S-L-O-W-E-R. I used to think they were overly courteous. Or obsessively safety-conscious. I've seen Canadian drivers who waited at stop signs for at least three minutes, even when nobody was coming for miles in any direction.

My other theory was that they were unable to understand the right-turn-on-red law. I was behind a Canadian today who had stopped at a traffic light with his right blinker flashing. I kept looking around, to see what he was waiting for, but during the two minutes before the light changed, no car ever appeared. I even honked at him a couple of times, to no avail.

So the light turned green, and he finally completed his right turn. But the next traffic signal was only a block away, and I prayed that it would stay green long enough for me to make my right turn.

No such luck. It turned red.

And he was in the right lane again. Crap.

Plus, his right blinker was flashing again. Double crap.

No cars for miles. Of course.

After thirty seconds of waiting, I gave him the horn.

No response. Another thirty seconds, another beep. Nothing.

So I swung into the left lane to make a right turn around the front of his car.

That's when he gunned it. I swore under my breath, and quickly swerved to swing wide.

And we completed our right turns in perfect formation.

Luckily, we were turning onto a two-lane street: him in the right lane, me in the left.

That's when I saw his face, smiling fiendishly.

Aha! Now I understand what all those S-L-O-W Canadian drivers are up to.

They come all the way down to Phoenix just to f*ck with our heads.

80° and sunny today.
March came in like a lion.
A sunbathing, margarita-sipping lion.