Two roads diverged in a yellow wood,
And sorry I could not travel both
And be one traveler, long I stood
And looked down one as far as I could
To where it bent in the undergrowth.

Then took the other, as just as fair,
And having perhaps the better claim,
Because it was grassy and wanted wear;
Though as for that the passing there
Had worn them really about the same.

And both that morning equally lay
In leaves no step had trodden black.
Oh, I kept the first for another day!
Yet knowing how way leads on to way,
I doubted if I should ever come back.

I shall be telling this with a sigh
Somewhere ages and ages hence:
Two roads diverged in a wood, and I--
I took the one less traveled by,
And that has made all the difference. 25th December
My dearest darling - That partridge, in that lovely little pear tree! What an enchanting, romantic, poetic present! Bless you and thank you.
Your deeply loving Emily

26th December
My dearest darling Edward - The two turtle doves arrived this morning and are cooing away in the pear tree as I write. I'm so touched and grateful.
With undying love, as always, Emily

27th December
My darling Edward - You do think of the most original presents; whoever thought of sending anybody three French hens? Do they really come all the way from France? It's a pity we have no chicken coops, but I expect we'll find some. Thank you anyway, they're heaven.
Your loving Emily

28th December
Dearest Edward - What a surprise - four calling birds arrived this morning. They are very sweet, even if they do call rather loudly - they make telephoning impossible. But I expect they'll calm down when they get used to their new home. Anyway, I'm very grateful - of course I am.
Love from Emily

29th December
Dearest Edward - The postman has just delivered five most beautiful gold rings, one for each finger, and all fitting perfectly. A really lovely present - lovelier in a way than the birds, which do take rather a lot of looking after. The four that arrived yesterday are still making a terrible row, and I'm afraid none of us got much sleep last night. Mummy says she wants to use the rings to 'wring' their necks - she's only joking, I think; though I know what she means. But I love the rings. Bless you.
Love Emily

30th December
Dear Edward - Whatever I expected to find when I opened the front door this morning, it certainly wasn't six socking great geese laying eggs all over the doorstep. Frankly, I had rather hoped you had stopped sending me birds - we have no room for them and they have already ruined the croquet lawn. I know you meant well, but - let's call a halt, shall we?
Love Emily

31st December
Edward - I thought I said no more birds; but this morning I woke to find no less than seven swans all trying to get into our tiny goldfish pond. I'd rather not think what happened to the goldfish. The whole house seems to be full of birds - to say nothing of what they leave behind them. Please, please STOP.
Your Emily 1st January
Frankly, I think I prefer birds. What am I to do with eight milkmaids - AND their cows? Is this some kind of a joke? If so, I'm afraid I don't find it very amusing.
Emily

2nd January
Look here, Edward, this has gone far enough. You say you're sending me nine ladies dancing; all I can say is that judging from the way they dance, they're certainly not ladies. The village just isn't accustomed to seeing a regiment of shameless hussies, with nothing on but their lipstick, cavorting round the green - and it's Mummy and I who get blamed. If you value our friendship - which I do less and less - kindly stop this ridiculous behaviour at once.
Emily

3rd January
As I write this letter, ten disgusting old men are prancing about, all over what used to be the garden - before the geese and the swans and the cows got at it; and several of them, I notice, are taking inexcusable liberties with the milkmaids. Meanwhile the neighbours are trying to have us evicted. I shall never speak to you again.
Emily

4th January
This is the last straw. You know I detest bagpipes. The place has now become something between a menagerie and a madhouse, and a man from the Council has just declared it unfit for habitation. At least Mummy has been spared this last outrage; they took her away this afternoon in an ambulance. I hope you're satisfied.

5th January
Sir, Our client, Miss Emily Wilbraham, instructs me to inform you that with the arrival on her premises, at half-past seven this morning, of the entire percussion section of the Royal Liverpool Philharmonic Orchestra and several of their friends, she has no course left open to her but to seek an injunction to prevent your importuning her further.
I am, sir, Yours faithfully
G. Creep, Solicitor-at-Law

We used the Bush Highway yesterday, on our way up to Payson. This scenic road starts a bit over a mile from our house, and I've always wondered how it got its name. So I finally did the research when we returned home, and created this page for Wikipedia:

The Bush Highway begins at the northern end of Power Road in Mesa, Arizona and extends northeasterly through the Tonto National Forest, over the Arizona Canal, past the Granite Reef Dam, along the Salt River near its confluence with the Verde River, past Red Mountain, the Stewart Mountain Dam and Saguaro Lake, to connect with SR 87 (Beeline Highway) in Tonto, Arizona. It was named after the Mesa lumberman, Harvey Granville Bush. Construction on what was then called "The Harvey Bush Highway" began on March 21, 1933. The road opened to the public in 1934. Rosenbergs, H-Bomb, Sugar Ray, Panmunjom
Brando, The King and I, and The Catcher in the Rye
Eisenhower, Vaccine, England's got a new queen
Maciano, Liberace, Santayana goodbye 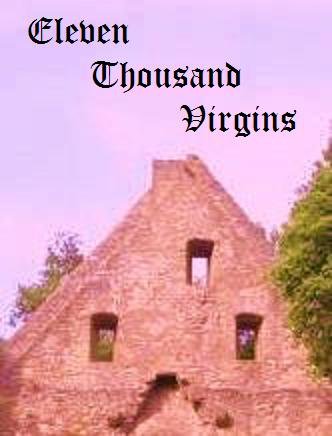 Log line: "Field of Dreams" with medieval chant music in place of baseball.

Synopsis: Alex Barnett has a comfortable life in Los Angeles and San Francisco; it's probably too comfortable, although he can't quite admit to himself that an extended separation from his wife Nicole eats at his soul. An unusual set of seemingly unrelated circumstances impels him to seek out a centuries-abandoned monastery in southwest Germany, where he confronts the animate image of Hildegard von Bingen, the legendary twelfth-century mystic, prophet, and composer of ravishing liturgical chants. Although his friend Lars believes it's a bona-fide vision, much like the visions that fueled Hildegard's own creativity, Alex cynically distrusts his deepest instincts and drives himself to search for a more acceptable answer. His quest guides him on the path toward self-awareness, through experiences both sacred and profane. One man's inner and outer pilgrimages take him to the depths of uncertainty, and, almost inexorably, to the peak of actualization.

Background: Hildegard of Bingen (1098-1179 AD) composed many chants in honor of Saint Ursula (?-383 AD). According to legend, Ursula was a Romano-British princess who, at the request of her father, King Donaut of Dumnonia (SW England), set sail across the English Channel with 11,000 virginal handmaidens to join her future husband, the pagan Governor Conan Meriadoc of Armorica (Brittany). Before the princess could arrive, all the virgins were beheaded in a massacre, and Ursula was shot dead. Modern research suggests the phrase "XI. M. V." was misinterpreted as "eleven thousand (in Roman numerals) virgins" rather than "eleven martyred virgins."

After designing an award-winning screenplay formatter in 2008, I went ahead and added nine others (sitcom, radio, theater and AV, plus A4 versions) in 2009.

They were all available on OpenOffice.org's Extensions and Templates websites, but those URLs have been very unreliable during the last six months. I kept hoping the sites would be fixed, but alas...

Plus, it seem needlessly wasteful to have the formatters scattered all over the place.

So I finally got off my lazy butt and consolidated everything here: http://9TimeZones.com/scr2.htm

All of the other reindeer USED to laugh and call him names. RubesCartoons.com