I make my living off the evening news
Just give me something, something I can use
People love it when you lose, they love dirty laundry

Well, I could've been an actor, but I wound up here
I just have to look good, I don't have to be clear
Come and whisper in my ear, give us dirty laundry

We got the bubbleheaded bleach-blonde, comes on at five
She can tell you about the plane crash with a gleam in her eye
It's interesting when people die, give us dirty laundry

Can we film the operation? Is the head dead yet?
You know the boys in the newsroom got a running bet
Get the widow on the set, we need dirty laundry

Dirty little secrets, dirty little lies
We got our dirty little fingers in everybody's pie
Love to cut you down to size, we love dirty laundry

We can do the innuendo, we can dance and sing
When it's said and done, we haven't told you a thing
We all know that crap is king, give us dirty laundry 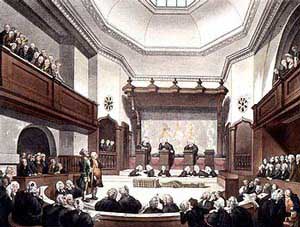 Sitting in the jury waiting room.

I was hoping I could immerse myself in reading, so the boring hours of forced captivity would pass by unnoticed. I had brought one book, authored by a friend. But it was turning out to be a dreadfully-written tome, and the full horror of my situation was just starting to sink in. I would be sitting amongst the unwashed masses all day, with nothing to do but make small talk.

And from what I could tell via overheard snippets of conversation, these folks were largely idiots.

Our babysitter/warden was disappearing for hours at a time, probably drinking to ease the existential pain of her job.

That's when I heard some music. I turned to look at the guy who was breaking the rules: "Is that a radio?"

"Could you use headphones?"

"There's a reason for that, genius. They told us electronic devices aren't allowed in this room. Right?" I had half-turned to address the room, looking for backup. They were all watching intently, but nobody said a word. It was the unnatural hush of a Coliseum crowd, waiting to see which gladiator would die. Did they really believe that everybody should have the right to play their favorite tunes in this cramped space? I could see where this was headed, but I pressed on anyway: "Can you turn it off?"

By this time, everyone was following our tête-à-tête with bated breath. The annoying little b*stard replied: "No."

So I stood up. He was a short guy. I'm six-foot. As I started to move in his direction, I could see the fear in his eyes. Had he pushed his luck a little too far?

But I just wanted to get the h*ll out. As I brushed past him, he half-raised his hands to ward off any blows. I laughed.

Outside, in the hallway, there were comfy seats. Windows. Room to move. I was almost happy the little sh*t had pissed me off.

Let me start off by saying this: I think Charlie Kaufman is a genius. Being John Malkovich, Adaptation and Eternal Sunshine of the Spotless Mind were brilliant pieces of writing. However, I found Synecdoche New York to be very difficult to watch. Most of the film is almost unbearably sad and disturbing. But then Charlie connected the dots, with this eulogy:

MINISTER [Mark Lotito]: Everything is more complicated than you think. You only see a tenth of what is true. There are a million little strings attached to every choice you make; you can destroy your life every time you choose. But maybe you won't know for twenty years. And you may never ever trace it to its source. And you only get one chance to play it out. Just try and figure out your own divorce. And they say there is no fate, but there is: it's what you create. And even though the world goes on for eons and eons, you are only here for a fraction of a fraction of a second. Most of your time is spent being dead or not yet born. But while alive, you wait in vain, wasting years, for a phone call or a letter or a look from someone or something to make it all right. And it never comes or it seems to but it doesn't really. And so you spend your time in vague regret or vaguer hope that something good will come along. Something to make you feel connected, something to make you feel whole, something to make you feel loved. And the truth is I feel so angry, and the truth is I feel so fucking sad, and the truth is I've felt so fucking hurt for so fucking long and for just as long I've been pretending I'm OK, just to get along, just for, I don't know why, maybe because no one wants to hear about my misery, because they have their own. Well, f*ck everybody. Amen.

I am requesting a permanent disqualification from jury duty. Since my reasons do not fit into the excuses outlined under the law, I will present them here:

1) PREJUDICE: Several years ago, I saw a robbery in progress, alerted the police and testified as a witness... but the case was dismissed on a technicality. I also sued a telephone company in a California small claims court for changing my number without notice... but that case was also dismissed on a technicality. Result: I will never vote for any Defendant, civil or criminal, because I now believe they are all guilty as f*cking sin.

2) PREJUDICE, PART 2: I worked for several law firms in California, so I know their methods intimately. I automatically assume all lawyers are backstabbers, liars and cheats. And slimeballs. Especially slimeballs.

3) SLEEP: I work on the graveyard shift and my normal sleep time is 7am to 3pm. My body takes several weeks to adjust to a new sleeping schedule, so I will be semi-conscious during normal jury hours. If I am deprived of sleep for very long, I start hallucinating. And if I fall asleep in the jury box... well, the snoring and drooling will not be very pretty.

4) FINANCIAL HARDSHIP: My employer pays for only two days of jury duty. After that, I won't be able to buy food. I will starve. And I hate it when that happens.

I certify that, to the best of my knowledge and belief, the statements provided herein are true and correct.

The image below was recently removed from SarahPAC.com, but it is currently viewable on Sarah Palin's Facebook page, where Palin uses phrases like "We'll aim for these races.." and "This is just the first salvo..."

This overheated rhetoric is taken literally by WAY too many wackjob conservatives, including Jared Lee Loughner. Like Sarah, he aimed at 20 targets. Then he fired 31 salvos.

Also: Representative Giffords clearly saw the danger in this kind of discourse, back in March [video from MSNBC].

First it was dead black birds in Arkansas.

Then it was jackdaws in Sweden and 40,000 devil crabs in Britain.

Now it's 100 tons of sardines, croaker and catfish in Brazil. Queen's "Bicycle Race" and "Fat Bottomed Girls" (from the "Jazz" album) were released in 1978 as a double A-side.

"Fat Bottomed Girls" includes the line "Get on your bikes and ride." "Bicycle Race" contains the line "Fat bottomed girls, they'll be riding today, so look out for those beauties, oh yeah," making a cross-reference between the two songs.

To promote the single, the band staged a famous nude, all-female bicycle race which took place on 17 September 1978 at Wimbledon Stadium in London. The picture sleeve showed a rear view of one of the women on her bicycle, but in the U.S., red panties were painted on (below) to avoid public outcry.

Legend has it the band rented the bicycles from Halfords, but upon returning them were informed they would be required to purchase all the seats, as they had been used in an improper manner (without clothing).