Anikó and I like to go hiking up in the Las Sendas community, just a few blocks away. The desert landscaping is spectacular, and many trails branch off the public sidewalks. In fact, "las sendas" means "the footpaths" in Spanish.

One day, we started hiking up a hill, and soon realized that the other side of the hill was right next to their golf course. It was the tricky 11th hole, and we couldn't believe the number of golf balls that had been abandoned, just off the fairway. We started enjoying our new game, out amongst the cacti and palo verde trees: "Look! Another one! Over there!" It was tons of fun, sorta like a treasure hunt.

That first day, we rescued 17 balls. Since then, we've gone back many times, accumulating hundreds more. It doesn't seem to matter how often we return; there are always new balls to rescue. Although we once tied our high score of 17, we haven't broken the record.

[What happens to the golf balls?]

Video clip transcription from the Jammin' in New York DVD:

I've got just the place for low-cost housing. I have solved this problem. I know where we can build housing for the homeless. Golf courses! Perfect: golf courses! Just what we need. Plenty of good land in nice neighborhoods, land that is currently being wasted on a meaningless, mindless activity engaged in primarily by white, well-to-do male businessmen who use the game to get together to make deals to carve this country up a little finer among themselves.

I am getting tired, really getting tired of these golfing cocksuckers in their green pants and their yellow pants and their orange pants, and their precious little hats and their cute little golf carts! It is time to reclaim the golf courses from the wealthy and turn them over to the homeless. Golf is an arrogant, elitist game and it takes up entirely too much room in this country.

It is an arrogant game on its very design alone. Just the design of the game speaks of arrogance. Think of how big a golf course is. The ball is that fucking big! What do these pinheaded pricks need with all that land? There are over 17,000 golf courses in America. They average over 150 acres apiece. That's 3 million plus acres, 4,820 square miles. You could build two Rhode Islands and a Delaware for the homeless, on the land currently being wasted on this meaningless, mindless, arrogant, elitist, racist - there's another thing: the only blacks you'll find in country clubs are carrying trays - and a boring game. Boring game for boring people. Have you ever watched golf on television? It's like watching flies fuck.

And a mindless game, mindless. Think of the intellect it must take to draw pleasure from this activity: hitting a ball with a crooked stick, and then walking after it! And then, hitting it again! I say, "Pick it up asshole, you're lucky you found the fucking thing. Put it in your pocket and go the fuck home, you're a winner. You're a winner. You found it!"

No, never happen. No, no chance of that happening. "Dorko" in the plaid knickers is going to hit it again and walk some more. Let these rich cocksuckers play miniature golf. Let 'em fuck with a windmill for an hour and a half or so, see if there's really any skill among these people.

Now I know there are some people who play golf who don't consider themselves rich. Fuck 'em! And shame on them for engaging in an arrogant, elitist pastime. 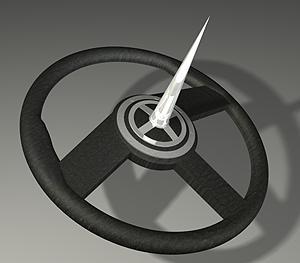 We coddle drivers too much in this country. If you run into something, POOF! An airbag instantly pops out of the steering wheel to protect your pretty little face.

There's no incentive to drive carefully. It doesn't matter if you crash, because your car will save you.

But we really need to teach people how to drive more defensively. So how about replacing the airbag with a spike? If you run into something, no airbag. Instead, a huge, sharp spike pops out of the steering wheel.

We would instantly become a country of courteous drivers.

Well, perhaps not quite instantly.

It might take a couple of weeks for all the idiots to impale themselves.

Congratulations!
Your orchestrated campaign of personal attacks, libels and death threats has forced me to remove this article.
The Second Amendment is fully intact. The First... not so much.

Congratulations!
Your orchestrated campaign of personal attacks, libels and death threats has forced me to remove this article.
The Second Amendment is fully intact. The First... not so much.

Happy Bicentennial Day to all my Mexican friends:

If you can keep your head when all about you
Are losing theirs [video] and blaming it on you;
If you can trust yourself when all men doubt you,
But make allowance for their doubting too;
If you can wait and not be tired by waiting,
Or, being lied about, don't deal in lies [video],
Or, being hated, don't give way to hating,
And yet don't look too good, nor talk too wise [video];

If you can dream - and not make dreams your master;
If you can think - and not make thoughts your aim;
If you can meet with Triumph and Disaster
And treat those two imposters just the same;
If you can bear to hear the truth you've spoken
Twisted by knaves to make a trap for fools,
Or watch the things you gave your life to broken,
And stoop and build 'em up with worn-out tools;

If you can make one heap of all your winnings
And risk it on one turn of pitch-and-toss,
And lose, and start again at your beginnings
And never breath a word about your loss;
If you can force your heart and nerve and sinew
To serve your turn long after they are gone,
And so hold on when there is nothing in you
Except the Will which says to them: "Hold on";

If you can talk with crowds and keep your virtue,
Or walk with kings - nor lose the common touch;
If neither foes nor loving friends can hurt you;
If all men count with you, but none too much;
If you can fill the unforgiving minute
With sixty seconds' worth of distance run [video] -
Yours is the Earth and everything that's in it,
And - which is more - you'll be a Man my son!

I guess I can never go home again. The airfare alone would cost an arm and a leg.

I still don't know what I want to be when I grow up.

I work in a building located right next to the runway at Scottsdale's airport. Many private jets are parked on the tarmac, each poised to meet the whim of some plutocratic a**hole. If the wind is blowing in the right direction, you can almost smell the fœtid stench of abusive power mixed with burning money.

The city of Scottsdale, Arizona is often seen, mainly by those of us who are poor, as snooty and too-rich-for-its-britches. Maybe that's because the mediæval stormtroopers make us show our immigration papers and spread 'em, when we pass the Scottsdale border checkpoint.

Anyhoo. Sometimes food trucks stop in the parking lot at our workplace, so we won't go hungry at lunchtime. And sometimes not. After all, we are simply feudal serfs who work in a right-to-starve state.

But now there's a new food truck in town: a gourmet food truck operated by a Le Cordon Bleu-trained chef who brings freshly-made crème brûlée to the unwashed masses and hand-torches it to order. Yes, this food truck could exist only in the warped reality that is Scottsdale: