When we moved to Arizona, we knew these idiots were still mired in their Wild West fantasies. But we always assumed that they would progress, not regress...

Yep, pardner, it is now legal for the 138,350 people with concealed-weapons permits in Arizona to bring their firearms into bars and restaurants (unless they see the Department of Liquor Licenses and Control sign).

I'm *so* looking forward to my first shootout at one of the local Marie Callender Pie Shops. 
He's laughing with another girl
And playing with another heart
Placing high stakes, making hearts ache
He's loved in seven languages
Jewel box life diamond nights and ruby lights, high in the sky
Heaven help him, when he falls
Diamond life, lover boy
He move in space with minimum waste and maximum joy
City lights and business nights
When you require streetcar desire for higher heights

Coast to coast, LA to Chicago, western male
Across the north and south, to Key Largo, love for sale

Face to face, each classic case
We shadow box and double cross
Yet need the chase

A license to love, insurance to hold
Melts all your memories and change into gold
His eyes are like angels but his heart is cold

Coast to coast, LA to Chicago, western male
Across the north and south, to Key Largo, love for sale 
If you're havin' trouble with the high school head
He's givin' you the blues
You wanna graduate but not in his bed
Here's what you gotta do
Pick up the phone, I'm always home
Call me any time
Just ring 36 24 36 hey
I lead a life of crime

You got problems in your life of love
You got a broken heart
He's double dealin' with your best friend
That's when the teardrops start fella
Pick up the phone, I'm here alone
Or make a social call
Come right in, forget 'bout him
We'll have ourselves a ball hey [REFRAIN]

If you got a lady and you want her gone
But you ain't got the guts
She keeps naggin' at you night and day
Enough to drive you nuts
Pick up the phone, leave her alone
It's time you made a stand
For a fee, I'm happy to be
Your back door man hey [REFRAIN]

To do is to be. -Descartes.
To be is to do. -Sartre.
Doobie doobie doo. -Sinatra. So I run into an Emmy- and GG-winning sitcom guy on Facebook, and I pitch him a series idea. He's interested. Tells me to write a spec pilot. So I create what I think is a groundbreaking script in six days. (On the seventh day, I rest.) It has a radical political treatise that morphs into an extended run of physical comedy, multiple levels of reality, Boomers having sex with teenagers, and Visigoths. (It might have been better to go with Ostrogoths, but I'm a sucker for the plosive V.) The script may have some weaknesses, but they're easily fixable.

After it's finished, the guy calls me up and starts giving me notes. Woo-hoo! He likes it, he really likes it! But there's not much help he can offer at this point, other than the feedback (which I incorporate into the script):

(45pp, 81kb) So now I'm wondering who might be interested in producing this series. Dear reader, any help you could provide will be welcome! [Log line/Synopsis]

JENNIFER (WHISPERING): Would you like to see me naked with that?
RUSS (NEARLY DUMBSTRUCK, TRANSFIXED BY HER AMPLE CLEAVAGE): Yes please.
JENNIFER (SWIPES HIS CARD AND HANDS OVER A RECEIPT): Then come with me.

This story just keeps getting better and better. [More background.] Download the MP3 (right-click, save link) and shove it up your iPod. ;-)

When a writer cranks out a multicamera sitcom script, s/he increments the scene numbers with a specialized alphabet:

I knew some letters were omitted, but I was never really sure about which ones nor why. So I've been asking around, and the best answer was provided by odocoileus:

Friends scripts are the only ones I've seen that go past R, and most sitcom scripts seem to end on L or M.

The reason for the omission of certain letters in the sequence is to prevent confusion between similarly shaped letters, like C & G, during camera movements. Written by Chip Taylor
Performed by The Troggs

Wild thing, I think I love you
But I wanna know for sure
Come on and hold me tight
I love you [REFRAIN] [INSTRUMENTAL]

Wild thing, I think you move me
But I wanna know for sure
So c'mon and hold me tight
You move me [REFRAIN]

When I first heard about the $20 bonus that new cab drivers receive for completing 25 accident-free shifts, I thought it was silly. But then I calculated the number of miles covered by the average cabbie, and I quickly realized that a typical commuter drives only about ten percent of the distance that a taxi driver accumulates during every shift. So we're ten times as likely to have an accident, just on the basis of mileage alone.

Then you have to add in these complications: (1) cabbies drive at least twelve hours at a stretch, (2) the taxi company often leases cabs to their drivers that are very poorly maintained, (3) nearly every destination is a Where's Waldo exercise in map-reading, and (4) house numbers are often missing or hidden.

To get an approximate idea of the challenge involved, imagine that you have to avoid hitting things while you're frantically scanning every building you pass, looking for a specific address.

This is just one of the many reasons for the enormous attrition rate among new cabbies. Only about two percent of the folks who first sit behind the wheel of a taxi continue driving until they have 25 accident-free shifts. But in order to sit behind that wheel, the new candidate must pass: (a) a drug test, (b) four written tests given during the two-day classroom instruction, and (3) a much-tougher-than-DMV driving test.

So when I sailed past the 25-shift mark today, I was expecting to get some sort of certificate in order to commemmorate the momentous occasion. Instead, I just received an extra line on my daily Driver Receipt. And when I walked out of the Leasing Office, I noticed that the taxi company's safety record is pretty much the same as it's been for the last two months: 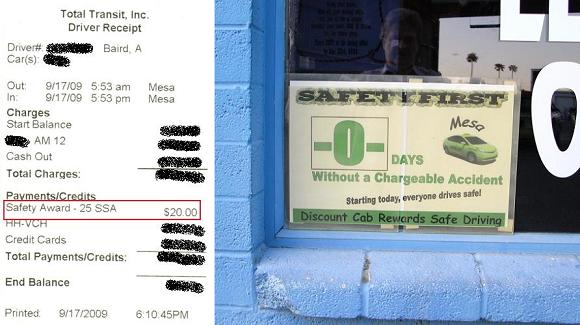 Another beloved teacher from my high-school years died recently:

Margret Andersen, previously of Westfield and Falmouth, passed into God's hands Saturday, Aug, 29, 2009 in Andover. She is survived by her high school sweetheart and husband of 63 years, Robert. She also leaves behind children, Laurits of Westfield, Carolyn of West Lafayette, Ind., Christian of Andover, Sandra of Woodbridge, N.J., and Niels of Minneapolis.

Meg (or, Mrs. A, to her students) taught chemistry and directed numerous high school musical productions in Westfield and Dennis-Yarmouth, was a Reagan Presidential Award winner for excellence in Chemistry, and a Smith College Medal winner. After retiring, Meg was a tutor of calculus.

Her husband, five children, 15 grandchildren, and three great-grandchildren mourn her passing after succumbing to Alzheimer's disease. We praise and thank God for her life, work, teaching, nurturing and guidance.

Yesterday, my Google Chrome browser started acting wonky, and I just found out why. When did GoogleUpdate.exe (their automatic updater) get added to the mix? I never gave my permission for Chrome to update itself, without asking me. This, in my humble opinion, is a dealbreaker. I plan to uninstall Chrome unless Google stops trying to force updates on us. This is VERY irresponsible software design.

Google tells itself, "Don't be evil." But even Microsoft, the Evil Empire incarnate, does not presume to update us automatically. With Microsoft, we have a choice.

Shoving updates down a user's throat is inherently wrong, and bad software design: you know it, I know it, we all know it. But Google doesn't know it? It's time they pulled their heads out of their butts.

The book entitled "Twitter Wit" is finally out. Samples:

(1) I wish LA was really as pretty as they made it look in "Blade Runner."

(2) I get really uncomfortable when people ask embarrasing questions about sex. Like: "Is that it?"

(3) Why should I be the one to take the kids to see their psychologist? I don't even love them!

» On 9/16/2009 08:35:00 AM Mountain Standard Time, Alan wrote:
One of the perks of being married to a Hungarian... is that you become aware of major cultural events like the recent Miss Poledance Hungary competition:

"One unlucky contestant was disqualified after her bra slipped off (apparently a no-no in world-class poledancing) [...]" Born to Be Wild

Like a true nature's child
We were born, born to be wild
We can climb so high
I never wanna die Walk on the Wild Side

And the colored girls say...

The late-afternoon call comes in from a fashionable part of Scottsdale. Hm. Maybe this is a lucrative airport run? I salivate in anticipation.

When I arrive, a young woman comes out, leaving her screen door open. Hm. This is a bad sign. She probably wants to cancel.

As she walks down the driveway, I notice a wad of cash in her hand. Hm. This is a good sign. Maybe she wants to apologize with a tip.

She approaches the passenger side of my taxi, and I finally notice that she has a voluptuous body, poured inside a low-cut dress. Hm. This is a VERY good sign. With a spectacular view like that, who needs cash?

I click the electric window button, to hear what she has to say. Sure enough, she holds out the wad of cash to apologize. And she leans towards me.

That's the last thing I remember.

When I come out of the hypnotic trance, a few minutes later, she's gone. And my sweaty hand is gripping the wad of cash.

So I offer a silent prayer of thanks, roll up my window, and drive away, whistling.

Stretched out on a blanket in the sand
Kids of all ages diggin' Disneyland
Rappin' on the C.B. radio in your van
We'll give a big "10-4" to the truckin' man [REFRAIN]

In Atlantic City or out in Malibu
Or anywhere between, I'm telling you
When you feel those balmy breezes on your face
Summertime is the best time anyplace [REFRAIN]

Thaumatrope is a Twitter fiction magazine for Science Fiction, Fantasy, and Horror under 140 characters. I sold two pieces to them when they started up, back in December.

As mentioned before, one piece finally appeared on August 16.

The second one appeared on August 23.

Excerpts from "The Christmas Show," teleplay by Aaron Sorkin:

MATT ALBIE (Matthew Perry): Danny? You're caring more about other people than you usually do.
DANNY: You're the one who just said, "What's she gonna do about the upfronts?".
MATT: Mine was an idle question, then I moved on to other things in my head.
DANNY: So was mine.
MATT: No, it wasn't. It was genuine interest.
DANNY: Look, in case you haven't noticed, she's doing a good job.
MATT: And there, you just defended her.
DANNY: What's wrong with that?
MATT: For starters, no one's attacking her.
DANNY: Go write!
MATT: Okay. [Matt leaves, Danny slams his hand on the desk, Matt returns] What?
DANNY: Nothing.
MATT: Say it. Just say it out loud!

DANNY [to Jordan]: I've been married twice before... and I'm a recovering cocaine addict... and I know that's no woman's dream of a man or of a father. Nonetheless, I believe I'm falling in love with you. If you wanna run, I understand... but you better get a good head start because I'm coming for you, Jordan.