I'm streaming KNRJ on the computer, and it's sad. They go off the air at 5pm, and lots of former DJs have shown up to mark the occasion. Two of the current DJs are chatting with a dance music record producer about the state of the industry.

Except when it's good change.

This is not good change.

On Friday afternoon, our local dance-music station, KNRJ, is going off the air. This s*cks. I plan to go into violent mourning.

Energy FM introduced me to some great tunes, like the Proper Education and Somebody To Love remixes, as well as David Byrne's vocals on Lazy.

Sh*t. I guess it's time to get an iPod docking station for the car...

The first phrase in the video clip below is a sample from this nursery rhyme:


Snail-dale, run out!
Your house is on fire!
You will get some milk and butter,
And they will be here tomorrow, too.


This second one is sung during a game that resembles "Tag" - the nyuszi/bunny is the toddler who sits quietly in a circle of singing children, until s/he jumps up to capture the next nyuszi:

The bunny lies in the grass while he naps.
Bunny, are you ill, that you can't jump yet?
Bunny hop, bunny hop, he just caught someone!

This third kids' song seems a bit cruel, but Anikó assures me that it's just poetic license:


Little squirrel, little squirrel, climbed up the tree.
Fell down, fell down, and broke his leg.
Doctor-man, don't heal him!
That impish squirrel will climb the tree again.


The fourth phrase is not a nursery rhyme - but it is a well-known expletive:

Shove a horse schlong into your butt.

For me, the best part of exploring a new language is learning the taboo words, the words that carry an unnatural amount of power... the dirty words. It's fun to chat with a group of foreigners and drop a carefully-timed expletive into the conversation. They all look at you like you're a... well... a foreigner, and marvel at the fact that even though you don't know how to say "sorry" or "excuse me" in their language, you DO know how to say "motherf*cking c*cks*cker" with exquisite pronunciation and perfect inflection. Most of the time, they will laugh. But even if they don't, it's okay. Nobody wants to hang around a bunch of prudes, anyway. So acquiring a healthy vocabulary of swear words has always proved to be a very useful exercise, even if it just filtered out the tightasses. When I married Anikó eight years ago, one of the first things I asked her to teach me was how to curse in Hungarian.

In 2006, I went to a tennis tournament at a large stadium in the Palm Springs area. According to the program, one of the competitors was from Romania. However, I was almost sure that he was mumbling to himself in Hungarian. I imagined that he came from a long line of proud Székely warriors, who had suffered under Romanian oppression for nearly a century. As the match wore on, and his performance started going from bad to worse, he shouted a single filthy word in Hungarian. It was unmistakable. When I heard it, I let out an involuntary laugh. Judging from the silence all around me, I was the only spectator in the 16,000-seat stadium who understood what he was saying. After the next point--which he lost--there was another Hungarian profanity. I laughed at that one, too. He smiled up at me. But the match was turning into a disaster for him, and he started yelling many different, colorful phrases. I marveled at his creativity, and laughed every time. The referee couldn't understand the words, so he didn't stop the guy. But the crowd began to catch on, and every time I laughed, they laughed, too. At the end of the match, the player walked over to my part of the stands, and held out his hand. I walked down to shake it, and to offer my condolences. He said the loss was not as painful as it might have been, because he had enjoyed expressing himself freely, so far from home, in front of a guy who clearly understood his frustration.

How to win friends and influence Hungarians...

(Translation: Hi, How are ya, I'm fine thanks, It's a whore's life.) If the Annotations don't show up, click the bottom right up-arrow, top choice.

My fellow Arizonans seem hell-bent on sending the message above to the rest of America.

We already have a law on the books that "Marriage between persons of the same sex is void and prohibited." A few years back, this ban on same-sex marriage was challenged in court, and found to be constitutional. So the legal question has been settled.

But on November 4, we'll have to make a decision on Prop. 102, which would change the Arizona constitution to define that "only a union of one man and one woman shall be valid or recognized as a marriage in this state."

I was researching the British predilection for using dashes immediately following commas, semicolons and colons, when I came across these two articles:

What's it like to give up your country, your culture, your language, your family, your friends, your managerial position, to be with the one you love?

I don't have a clue. But Anikó knows.

Today, the sale of the Budapest condo became final, and my wife feels like she has lost one of her strongest anchors to Hungary. This transaction was for a good cause: Anikó was able to help both of her adult kids buy their first condos... but that still couldn't hold back the sadness.

This morning, Anikó told me that she feels lonely. I tried to comfort her, but I suspect this loneliness runs far deeper than anything I've ever known.

In the midst of our recent whirlwind of activity, we discovered a couple of great things:

(1) One of the last of the Mesa orange groves. It's surrounded by freeways, housing developments, and all the other accoutrements of urban sprawl. And yet it's still an oasis, a haven from the hustle-bustle. Peacocks strut amongst the trees in the nursery. A snow-white male had a bluer-than-blue "scarf" around his neck. The place was magical. We didn't want to leave.

(2) The Gorillapod: this amazingly flexible tripod lets you mount a lightweight camera just about anywhere... including on the top of a computer screen. The ball and socket joints each have 360° rotational range, with rubberized rings and feet.

I love good design, wherever it pops up, and this little gadget is f*cking BRILLIANT.

My wife's sister, Erzsébet (Elizabeth, or "Zsike"), has had a tough time over the last few years. First, there was the heart crisis that was finally solved by a pacemaker. A year later, there was the crisis when the pacemaker started to fail, solved by a second implantation. Then there was a growth in the abdomen, solved by a colostomy.

But when we saw her a few weeks ago, she looked better than she had in many years. It was pretty funny when she asked me (in pantomime; we don't really speak each other's language) to show her the scars from my recent shoulder surgery. After I tried to find the 3 tiny arthroscopic incisions, she dramatically pulled her blouse out of her jeans and showed me her colostomy bag, along with the 18-inch scar across her abdomen. Yikes! Zsike won. ;-)

Zsike has a marvelous sense of humor, and a heart of gold. She's not just another in-law to me; I really like her. But just after we returned from Europe, a couple of weeks ago, we heard that her health has become much worse, and the doctors have promised to do all they can. It was shocking news. Anikó, of course, is devastated.

So we've been scrambling around to use the money Zsike gave us, to fulfill her last wishes - that Anikó would have a couple of orange trees in the back yard, and that we would get broadband, for videophone calls. It's sad, sad work.

Anikó and I spent last weekend digging huge holes in the back yard, to accommodate two new orange trees, and I spent most of this week setting up the broadband, wiring, software, camera, etc. for our new video connection to Budapest. By the time everything came together, on Friday morning, I was anxious to see how it would work. So, without thinking, I searched for Zsike's listing on Skype, and hit the Call button.

Sure enough, there she was. And there I was, in a little video box down in the corner. We were both delighted to be able to see and hear each other. So we waved.

At that point, I suddenly remembered that I only knew about three greeting words in Hungarian. So I laughed, in embarrassment. And she laughed, because she simultaneously realized that we had always relied on Anikó to provide our translations.

So I said my three greeting words. And she provided the simple responses that she knew I would understand. We laughed again. I pantomined a few stupid things. She nodded and laughed at my silliness. We were both soooooooooo excited to see each other. Eventually, I waved and said, "Bye-bye." I knew how to say "I will go get Anikó" in Hungarian, but I didn't know the word for "tomorrow," so I pantomimed something, at the end of the call.

I immediately called Anikó at work, and she was pleased to hear the happiness in my voice. She knew how hard I had worked, to set up this video connection. Later in the afternoon, she received a long eMail from Zsike, equally excited. Zsike had even understood my clumsy pantomime for "tomorrow."

That evening, something crashed the video connection when we tried to call my adult stepkids in Budapest. So I stayed up half the night, restoring old files, searching for updated drivers, downloading new software, uninstalling and reinstalling programs, etc., all in preparation for the big Saturday morning call.

When the moment finally arrived, I was exhausted. Anikó sat beside me, staring expectantly at the old digital camera I had converted into a webcam, so we crossed our fingers and clicked the Call button.

As if by magic, Zsike appeared. We were all strangely silent. At first, a tiny smile crossed Zsike's face. Then a single tear rolled down her cheek. I looked at Anikó, who was mesmerized by the image of her big sister. Tears were rolling down her cheeks, too. Suddenly, I realized that my face was also wet. After about thirty seconds, we all said "Hi" in Hungarian.

From there, the words flowed like a tidal wave. Every now and then, Anikó translated something for me, but she soon realized that I understood most of the conversation, just by the expressions on their faces.

I taught Zsike how to capture some still-frame images. Then Anikó narrated a video tour of our house, which Zsike has never seen, while I moved the camera around. Near the end of the call, I pointed the camera out the back door.

And we introduced Zsike to her new baby orange trees. 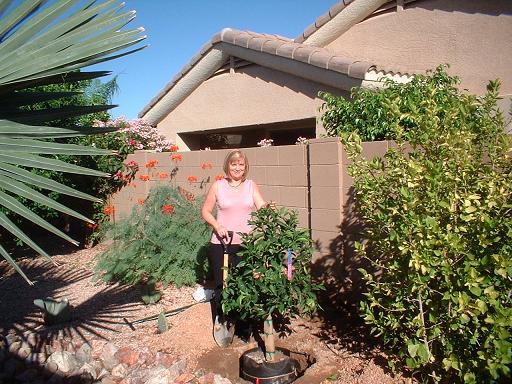